Being in a house with TV today, I woke up this morning to watch the Macy’s Thanksgiving Day parade. I was still a little sleepy but one of the the first  floats I saw, I swear, was a turkey surrounded by Pilgrims and  Avril Lavegne lipsynching. Yay weird American traditions!  Sometimes I think humor is the only way to handle the sort gross missrepresentation of American history one sees around this holiday. This image below, for example, made me chuckle:

Of course, there are always exceptions—last Thansksgiving, the NY Times has an excellent article by Jill Lepore on what life was really like for Ben Franklin—as compared to his sister Jane. Really fascinating stuff from a historian I admire.

Thanksgiving was a small but good one . I threw these decorations together at the last minute with other decorations my mom had and some leaves from outside. I was thinking that I wish I had brought my knitted pumpkins from my apartment—they would have fit right in: 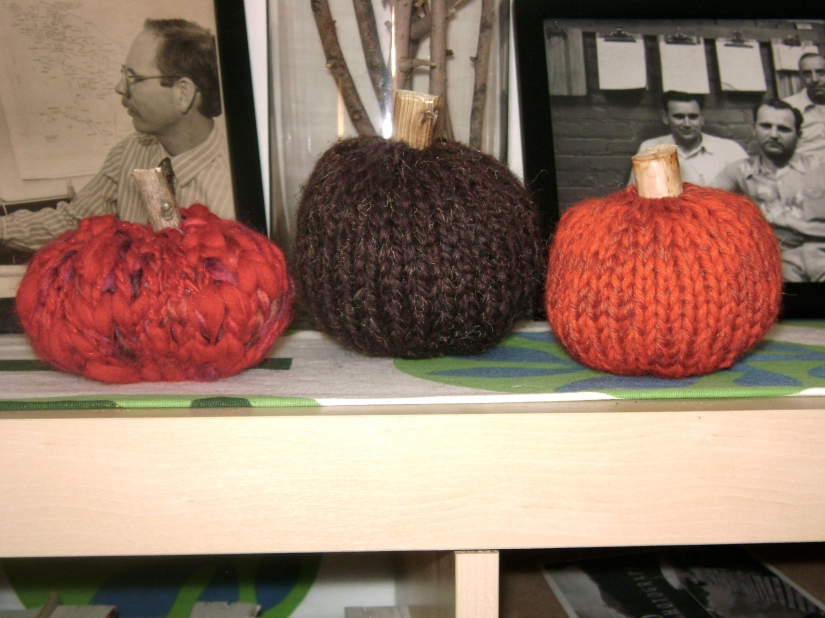 I used this ravelry pattern, but after I made them I came across a ton of others that were even more elaborate. I’m pretty happy with how these turned out, though I never did get around to using thread to make the different sections. I bet it could be modified to make a gourd too. The best thing about these pumpkins is that you can use up small bits of really cool looking yarn that you have left over.

What I did “craft” to put on the table this holiday was the dessert. For some reason I wanted to make a tart. A lemon tart, specifically. And this turned out to be a lot more work than I bargined for

I used a Martha Stewart recipe for a caramelized lemon tart. While making the crust recipe  I discovered two things. 1. The tart pan I was had a raised bottom but not a removable one. The first time I tried to make a crust in this, it was a disaster, bubbling in the center and with no edges. But thankfully I discovered 2. The recipe was made for a much larger tart pan, so I had enough to do a second, improved crust:

Then I made the filling—squeezing 6 lemons and separating a dozen yokes from whites took forever, as did cooking it. I was in a hurry at this point, so the photo is pretty blurry.

But finally, I got to the really fun part: caramelizing the top. There was a brief moment where it looked like we were out of sugar (!) but it turned out okay because there was some left in the sugar bowl on the table. I used the broiler to get it to brown. Again, I wish I’d put on more and taken more time to do this, but the results were delicious.

I’m really pleased with the effect—the crunchy caramelized top is a great contrast with the smooth tangy lemon filling. But seriously: so much work!

3 thoughts on “Day of Thanks”