It’s been exactly a year since I posted about my tutorial on how to dye yarn blue using black beans, and even longer than that since I wrote about the left-handed knitting challenges of a custom-fit raglan sweater. Now I’m finally going to show you the finished objects!

I love the finished product! But it certainly was a long road to get there.

As you may recall, the blue yarn was separated into 1/2 oz. dye lots and one 1 1/2 oz .dye lot. As I mentioned at the end of this post, I went back and divided the larger blue yarn into three 1/2 oz. skeins and overdyed so that every 1/2 oz. was a different shade of blue. Way too much work!

When I finally had them all complete, I started making the Wave Cowl by Rebecca Hatcher, using a half ounce skein of a different hue for each “wave” from lightest to darkest to create an ombre effect. It worked great!

But I still had two issues to solve. The first you can see in the above picture—the bottom kept rolling up, which was made worse by the tightness of this end of the cowl. The 1/2 oz. skein didn’t quite go as far as planned on the last wave, which was the biggest since it tapered up at the neck. So then I blocked the whole cowl. 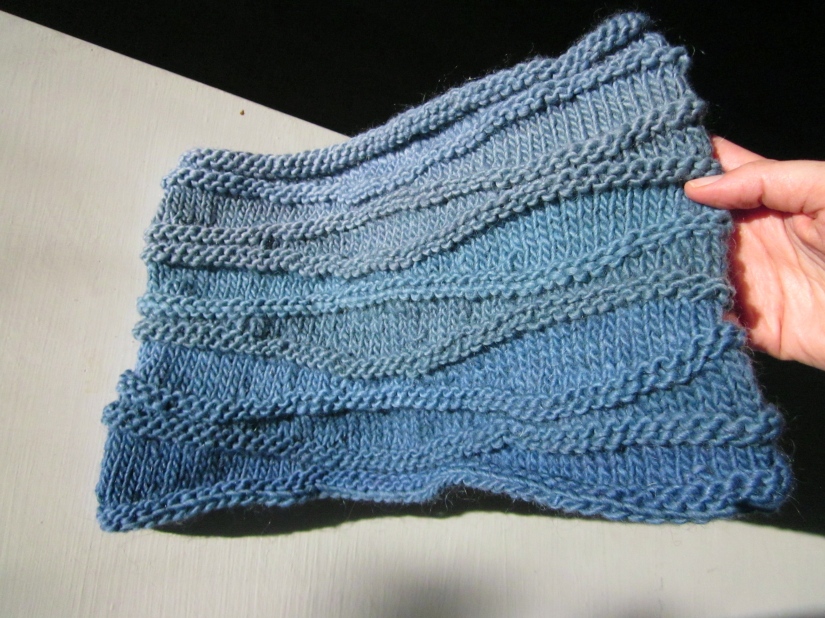 It was beautiful, and the bottom rolled up much less! But it created problem two—now the cowl had lost its stiffness and would not stand up when around my neck. After all that work! So I did what I assume most knitters would do. I improvised. Which basically involved overlapping part of the cowl and stitching together at an angle, increasing the tapering effect and allowing the cowl to stand up properly once again! You can see the seam in the second photo here:

And now, one winter later, this is one of my favorite things to wear on a cold night.

Unlike the cowl, with this project I started with Pamela Costello’s customizable pattern and then went through my stash to find enough yarn to knit it! I know it’s technically “aquamarine” not blue, but close enough:

As I noted before, the main difficulty I had with this sweater was learning how to do the raglan sleeve increases while knitting left handed. I had no trouble at all with the directions to make it a V-neck (I did an increase every 4 stitch for this depth), and I loved being able to try it on in stages as I made it:

I will say that the estimated yarn was not accurate for me because at almost 5’8 but making a rather small size otherwise, I ended up with extra skein of yarn (Hayfield Grampian DK wool blend, if you are curious). I loved that I was able to make it long enough for my arms! I might have made the V-neck  even deeper if I’d known how much the ribbing would add back to it— here’s the non-blocked sweater before adding the neck ribbing, and the blocked sweater with neck ribbing:

And here’s a view of the back of the completed sweater (ironically taken on a hot summer day, hence the shorts!) 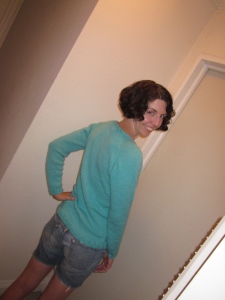 And finally, here I am wearing it more recently under a blazer when it was actually cool weather. I probably would not have bought a sweater this bright, but it turns out I really like the color.

And that concludes the blue yarn finished objects!