I’ve been so busy with knitting and gardening that I haven’t had time to blog about either of them! I decided to break it down into small chunks, so even though I have already finished my cowl from the bean-dyed blue yarn, made significant changes to and progress on my custom fit raglan sweater and even planted the first plot of my summer veggies (!), I am going to save those for later posts.

This was how my front yard looked last week—and it has only bloomed more since then. The lavender and geraniums in the background are the only plants that were here when I moved in, and they were pretty scraggly. Since then I’ve been adding more flowers each year, like the purple and yellow columbines in the foreground… 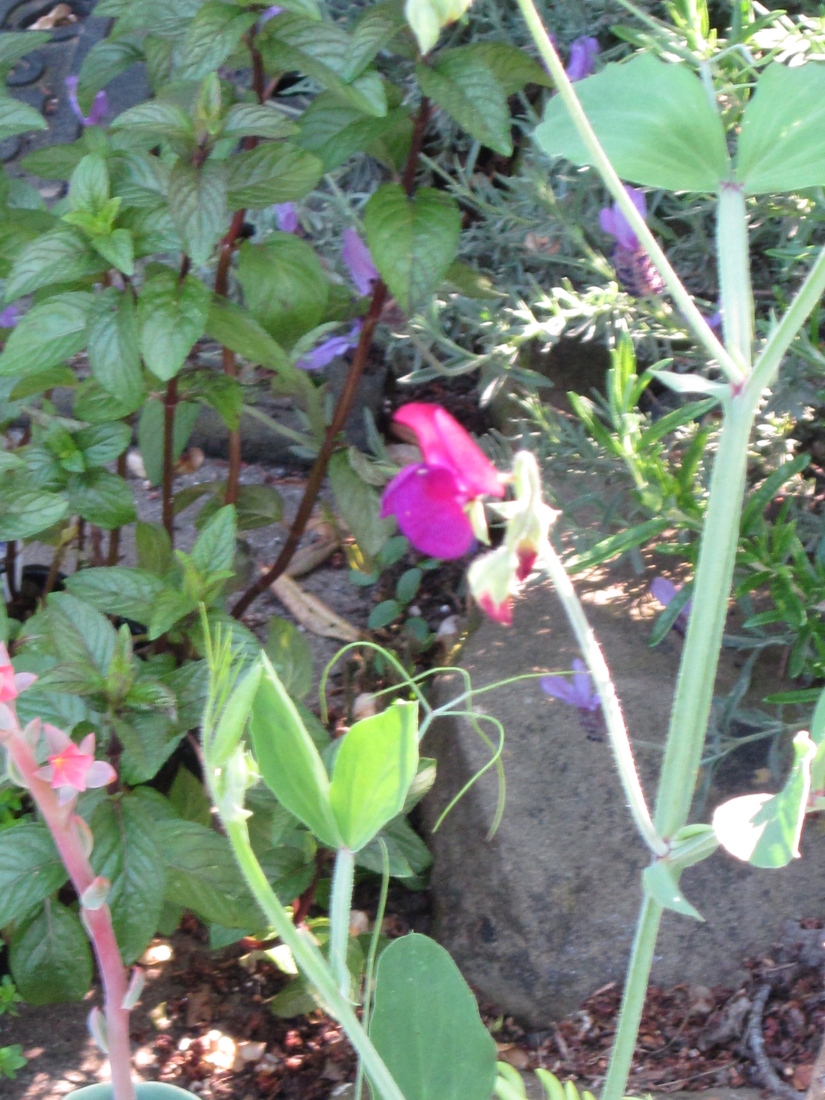 and this pink and yellow blooming echeveria, a succulent (unrelated to the trailing green succulent in background, which should be in bloom with small pink flower soon).

What do these plants have in common? They were all free! Free is an important priority in my garden. These plants came from giveaways, neighbor’s yards (with permission), or wild seeds.

If you want plants that are free and easy to care for, I highly recommend succulents, those fleshy, water retaining plants (cacti are only one type of succulent, and perhaps my least favorite). Many of them will start from pieces broken off from their original plant. They seem to thrive on neglect—my front yard is only partly sunny and I’m bad about watering it regularly, but the succulents just keep on living and even reproducing. Mine have come from my neighbors and my mom mostly, but I scavenged some beautiful ones from a green waste pile. I can probably break you off some of the more abundant ones if you like!  I’m partial to floral shaped ones, but I actually have quite a variety:

Since the rains came late this year, I’m getting spring flowers while I’m still harvesting my winter vegetables. I didn’t harvest too much this year, but what I did get was delicious:

Spinach did fantastic in this spot—my favorite use for this has been salads with strawberries, blueberries and vinaigrette. 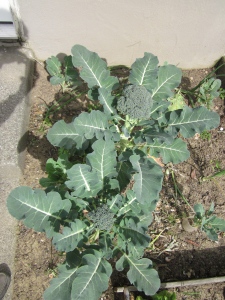 Broccoli finally came in. Just in time too, if it had waited another week it would have probably flowered in the 90 degree heat. 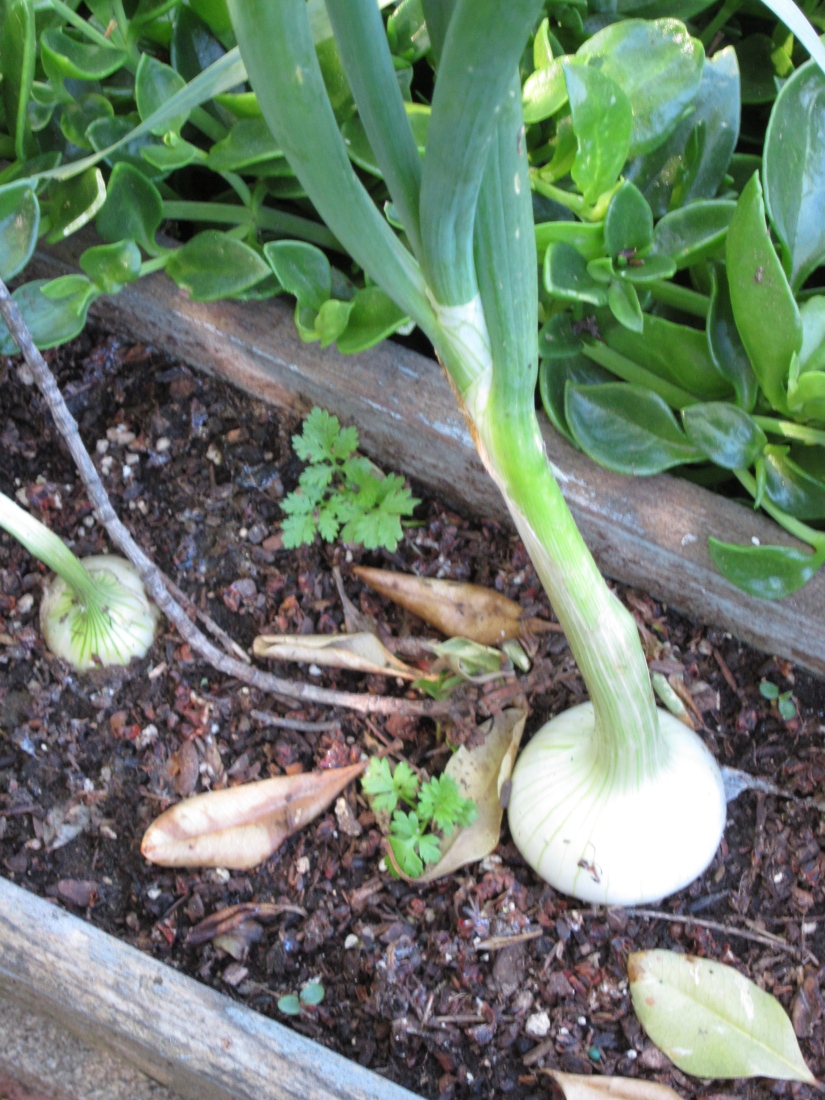 And onions—I planted these all over the place in the fall, some like these are ready and some are not even close, so I will probably continue to harvest them throughout the spring if I can.

The new addition to my gardens this year is actually one you won’t notice: compost from my worm bin! The purpose, of course, is for the worms to create some soil building compost from my fruit and veggie scraps so I can use it in my garden. I went to a workshop put on by Project Compost at the beginning of March (they do one once a quarter on campus), where I got my very own free worm bin and worms. It fits nicely under my sink. 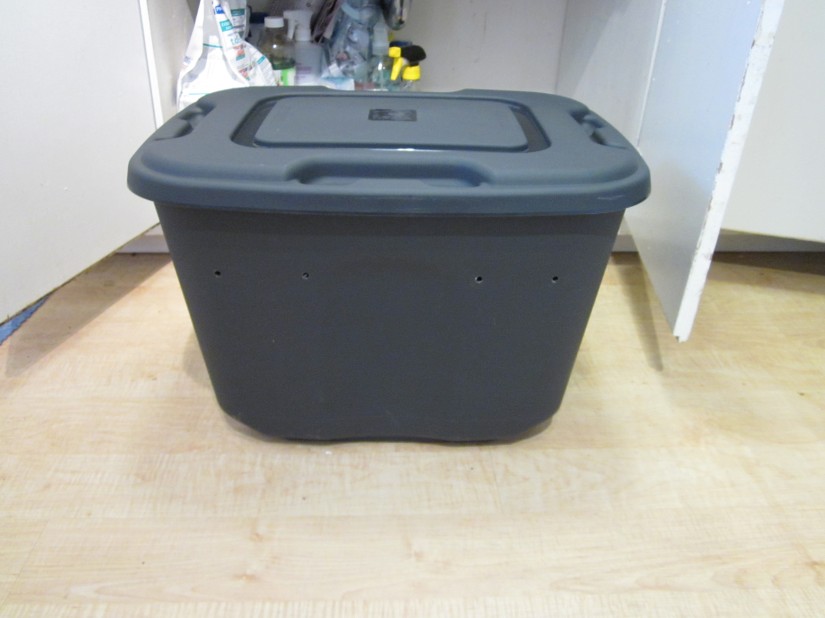 I thought I understood the basics of composting, but it works a little different for vermicompost.  For worms, the bin has to have holes drilled in it for air, shredded damp newspaper inside for them to move around in, some sand they can use to digest their food (without teeth), and the right amount of food scraps. Right now, my worms eat about 1/2 -3/4 cup of food scraps a week. At this rate, I hope to harvest a decent amount compost from them by the end of May.The worms are red wigglers, which are different from earthworms in that they can survive in this kind of non-soil environment and they can eat a ton and reproduce quickly. I noticed a bunch of tiny baby worms in here recently, so they seem happy to me! 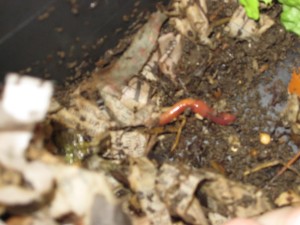 I also went to a composting workshop put on by the City of Davis, which had excellent info on worm bin composting including how to construct a bin and where to get your worms. For instance, I learned from the city workshop that the holes drilled in my bin from project compost were too big and would let fruit flies in. I have since taped strips of window screen material over the holes, so that air can still get in but flies cannot.

Another cool thing I learned from the city workshop: seeds left in the compost bin often germinate. The damp environment and the rich compost are apparently an ideal combination. So I decided to see for myself: I left some bell pepper seeds attached to the scraps. Two weeks later, I had lots of crazy looking seedlings that I pulled out of the bin!

As you can see, the leaves were a sickly yellow color from the lack of sun, and the stems were all twisted. Also, apparently I had a random squash or cucumber seed you’ll notice in the bottom righthand corner. Of course, once I pulled these out of the bin, I had to try planting them. I put them into some starting medium and stuck them under my grow light. I didn’t expect all of them to live, but the results were actually pretty good!

Most of those are the bell pepper seedlings, along with the one unknown squash like seedling in the top left corner and a few tomato seedlings on the right. The tomatoes look similar except they are light green and have straight stems (I had tomato plants that were much further along, but I set them outside too early and they died).

I can’t believe how productive this compost bin has been already–and I haven’t even harvested the compost from it yet!