I’ve been wanting to do a follow up to my 2012 on quick winter knits and my 2013 procrastiknits post for a while now, and here it is! Between getting a cold last week and the 2014 Winter Olympics starting this week(ish), I’ve had a lot of time to whip up some projects. I think any of these would make great Ravellenic Games knits. (As a side note, if you have  qualms about anything having to do with the Sochi Olympics, check out what Leethal is doing on her knitting blog. Pretty genius move.)

One of these projects really is Valentine’s Day themed, but I’m going to say that there’s something for everyone to love here, including a few things for those who don’t care for the holiday whatsoever. So without further ado, here are my finished objects: a racerback tank, neck collar, ear warmer, cowl and chapstick holder. All are free patterns available on ravelry! 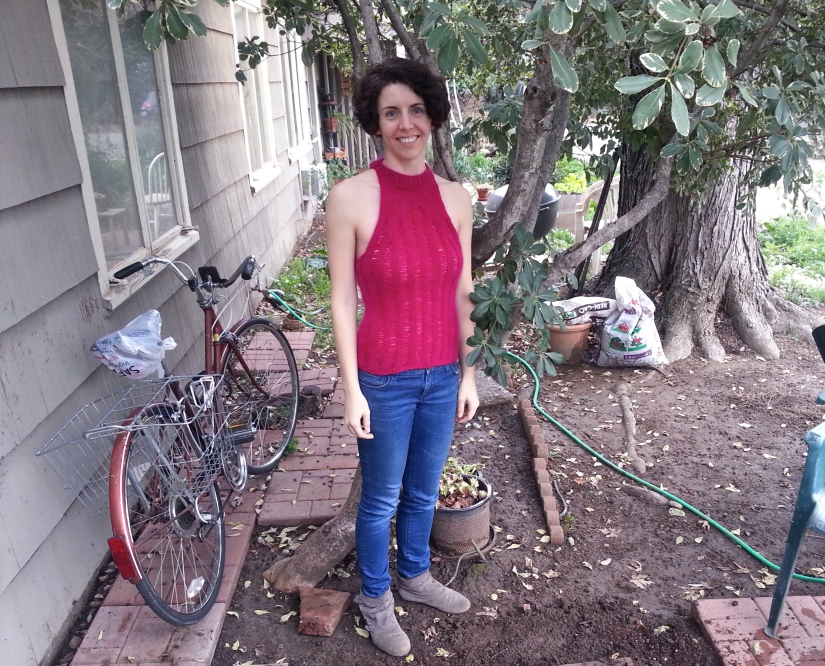 This Valentine’s Day, some good friends are throwing a dance party, and they encouraged us to dress for the occasion. Unfortunately, I don’t own any truly pink clothing. But instead of turing to the obvious solution (thrift stores, borrow something), I was like, “I bet I can knit something pink!” So that’s what I did.

This is my version of Annina Päivärinta’s Free Fall Tank. The amazing thing about this tank pattern is that it only take one skein! This is thanks to the drop stitch in the pattern, which I’d never tried before but loved. 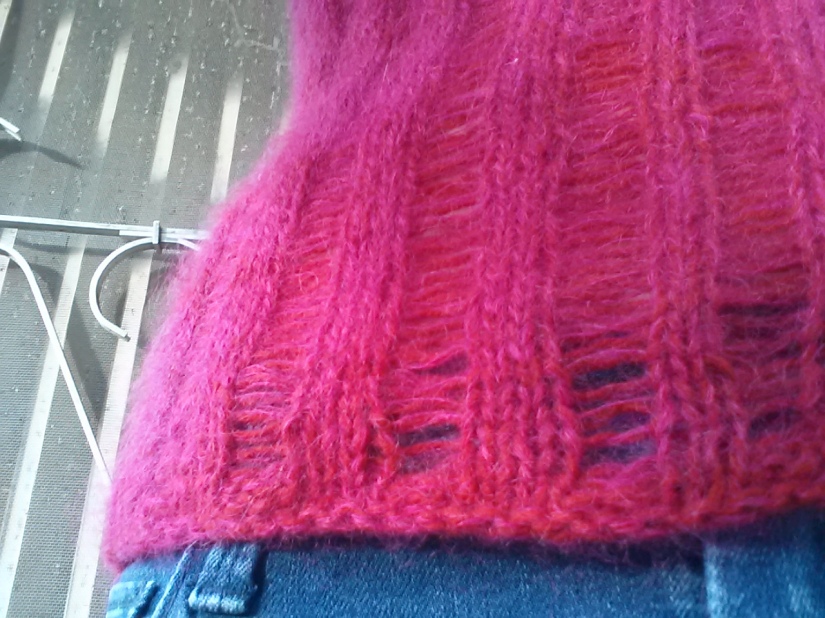 This photos is probably the closest to the true color of this tank. To get this color, I held together one strand of sport weight red wool I recycled from a thrifted sweater with two strands of a hot pink, lace weight mohair yarn that I have literally had in my stash since my roommate in college gave it to me. I have no idea why I kept it, but I’m glad I did.

There aren’t a lot of photos of people wearing this tank on ravelry, and I can tell you why—when you knit it in one skein of cotton yarn as directed, the drop stitches make it really revealing. In my version, using three strands of fuzzy yarn, this is not as much the case unless you are looking rather closely.

There were a number of comments about the chart for this pattern by ravelry knitters, and I’ll admit, it is a tad confusing. I’d say its an intermediate skill pattern. I made a size small with a few mods based on their comments and my own measurements:  stitch makers to mark all of the yarn overs, several extra inches of length, two stitches cast on at the bottoms of the drops instead of three, and an irregular rib at the bottom for three rounds. I’m really pleased with the results!

I made this quite a whole ago, but since it uses the same yarn combo as the free fall tank, it seems a good time to share it. The pattern is Kink by Jodie Gordon Lucas, featured in Knitty 2010.

This in-progress shot gives you a view of what the strands of yarn look like by themselves! It’s a pretty straightforward pattern that works with a variety of yarns and is not too difficult to memorize. You can also wear it in a number of ways, depending on how you attach your pin or button. I’m thinking about attaching another button so I can wear it differently. If you’re not ready to commit to a hot pink top, this is a good way to use a brightly colored yarn. I  mainly wear this with neutral colors, especially black. 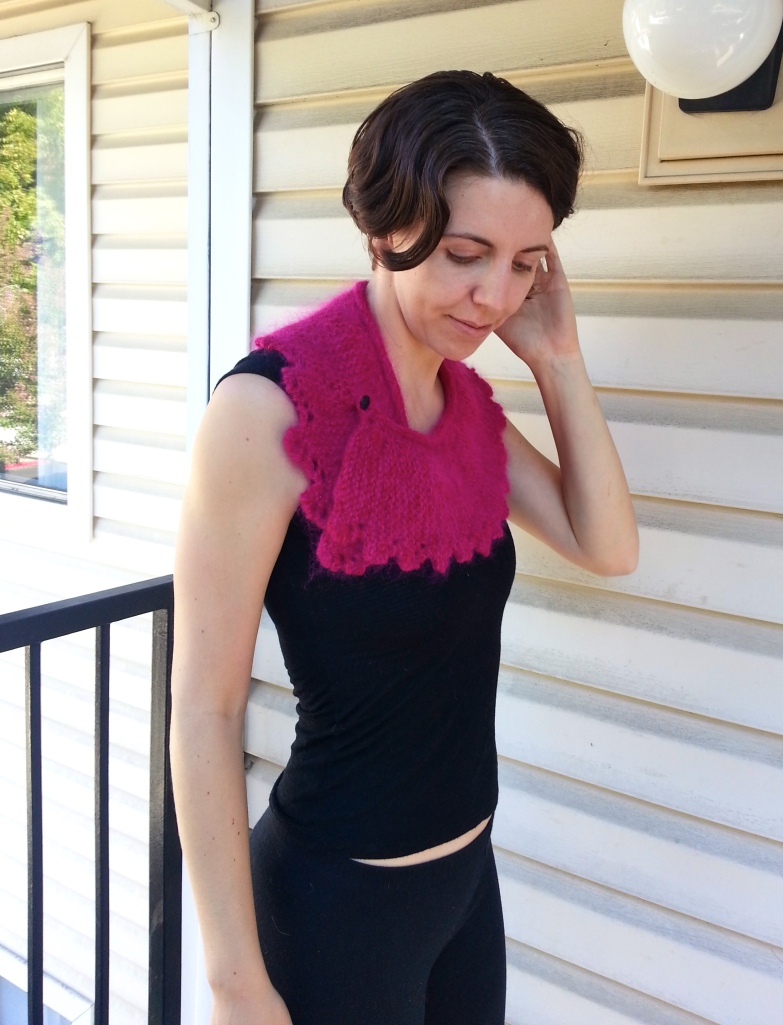 If you’re more the type to wear black on February 14, I’ve got two super easy projects for you. The first is this Ear Band pattern, appropriately titled Beginning Ear Warmer. I wanted the most straightforward pattern possible, and this garter stitch band was exactly that.

With my hair I can wear this two ways. My main reason for wanting a basic black ear warmer is for riding my bike—my ears get cold faster than anything else, and I wanted it to match anything I could possibly be wearing so that would never deter me from using it. 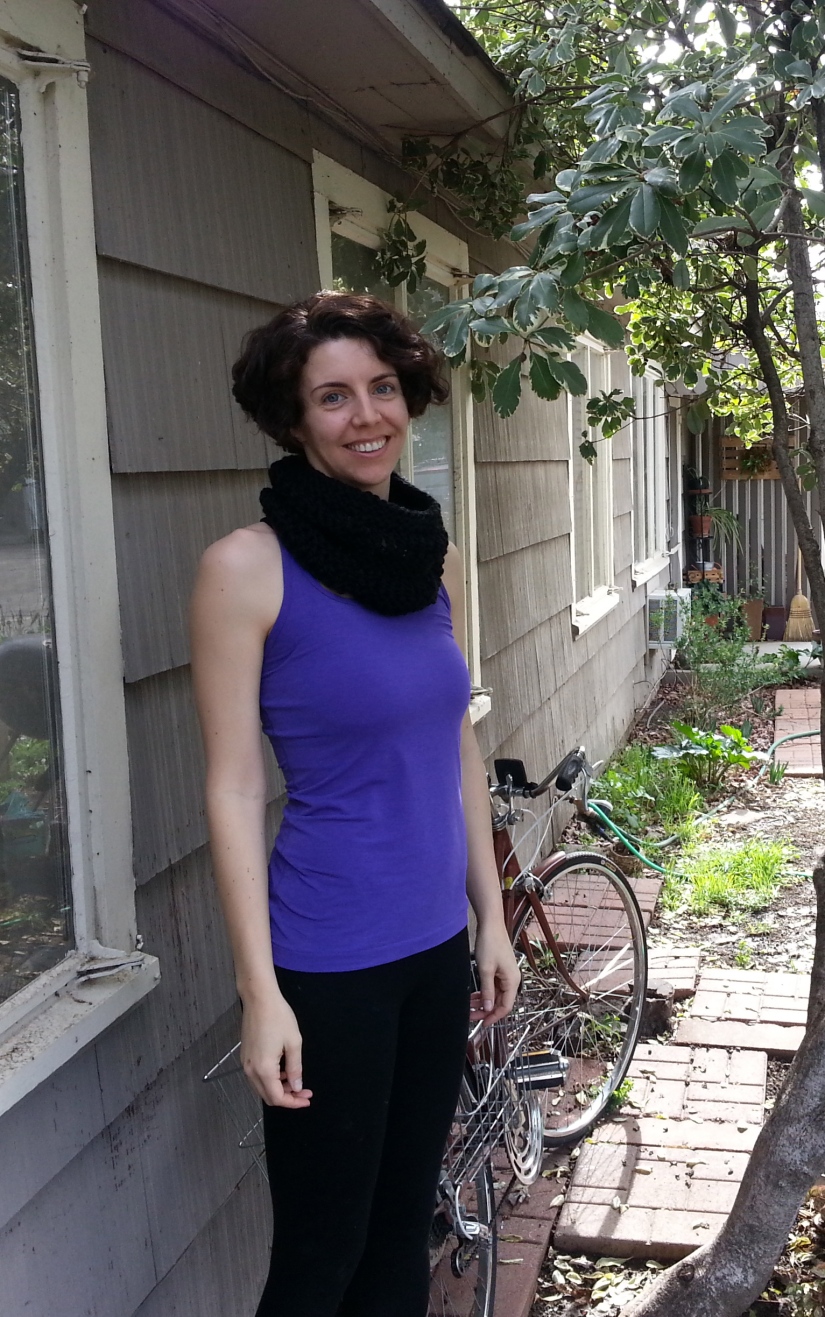 The quality of these photos doesn’t even capture how cool this cowl is (black objects + rushing to take photos = not the best idea). The pattern is Abi Gregorio’s Drop Stitch Cowl, which I became determined to knit after enjoying the drop stitch look on the free fall tank.

Most of the ravelery reviews insisted that this was a lightning fast knit, and they were right. I didn’t quite have enough yarn for the pattern, so in my version I used size 13 instead of size 15 needles, omitted one of the repeats ,and shortened two garter stitch sections. I would have loved if my cowl was  taller and wider, but I’m really impressed that there was a pattern to use up my leftover, super bulky black yarn!

I’m thinking I will make this cowl again in a color when I get the chance.

This is the only quick knit that wasn’t for me. After showing my sonic screwdriver chapstick holder to friends, I got a request for a basic chaptstick holder that could attach to a harness during rock climbing. So I used Victoria Trauger’s Chapstick Holder pattern and made this. I could tell you about how in my version I made some mods to make it fit better (12 stitches around instead of 16, 6 stitches instead of 8 for the flap), or how I love the elephant button I used at the top. But mostly I want to tell you why this is related to Valentine’s Day knitting. I supposed it could be the connection between chapstick, lips, and kissing. But personally, all I could think when I was making this pattern in this color was, geez, this looks really…phallic.

Nevertheless, this chapstick holder does its job! I attached a key ring to the side and handed it off to its recipient at the rock climbing gym last night. Here’s a blurry action shot of the chaptsick holder on his harness.

And that concludes this edition of quick winter knits! ❤