I haven’t posted much on food and foodways recently, but I have been definitely been making the most of the autumn season in the kitchen. Since Thanksgiving is this week, I thought I’d share a little about the recipes I’ve been cooking and the stories behind the dishes. As it turns out, the stories about why I cooked these foods are part of what makes cooking them meaningful.

This fall marks my first visit to Apple Hill—an area  just past Placerville with a large association of growers who attract tons of visitors to their ranches. Besides tasting the apple cider and apple cider donuts (which were as amazing as described!) my priority was to find a great U-Pick apple place and try a bunch of heirloom apple varieties.

I was not disappointed. The four of us who carpooled up there together had an awesome day filled with apple picking.

This was our haul—that’s my bucket with the scarf on the right. That night when we got home, two of us got together and made apple butter. Thus this recipe will forever remind me of Apple Hill Day.

Prepare the apples and put them in the slow cooker. Add other ingredients and mix. Cook on high setting for 1 hour. Reduce temperature to low and cook for 9 or 10 hours. Towards the end of this time, check on the apple butter and use a potato masher or a whisk to make the mixture smoother. Place in glass jars and refrigerate.

*This recipe is a variation on the All Day Apple Butter recipe from allrecipes.com. The main difference is that I use about half the sugar and no cloves. I find that two cups of sugar is plenty sweet! It was also all I had in the house at the time. You can also omit the sugar completely—we did this with a second batch and it also turned out well:

This batch was made with much sweeter apples. One thing we noticed with this variation was that it cooked down much quicker—it’s possible that was just due to the crock pot used, but keep an eye on it if you try this version. 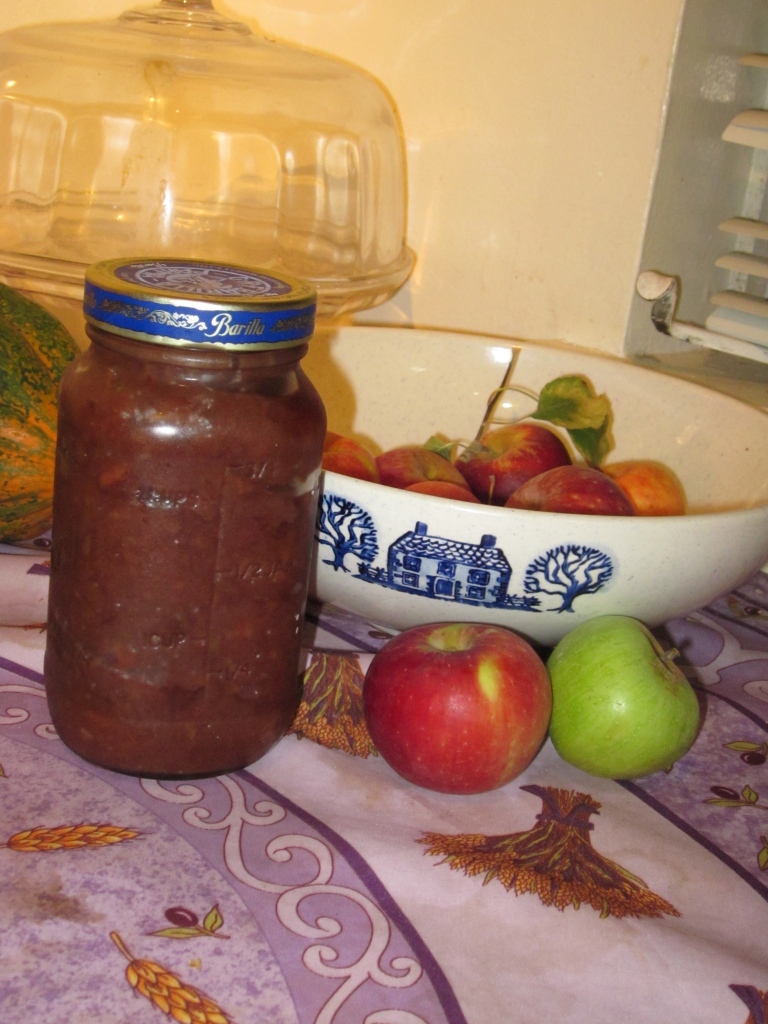 I still had a bunch of apples after making apple butter, so I also made apple rings.

Core and thinly slice apples. Place on baking sheets lined with parchment paper. Bake at 200 degrees F for about 30 minutes or until apples appear dry. 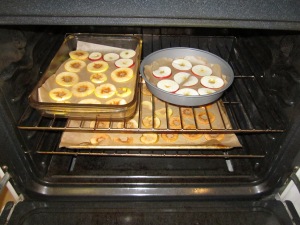 I pretty much winged it with this one—I took a look at a couple of recipes online to figure out the gist and then I went for it. If, like me, you don’t have a mandolin or a corer, I suggest slicing the apple whole until you get to the seeds, then core it, and then slice the rest. This worked the best for me. I used a bunch of different apple varieties and found that each takes a different time to cook, so some of my rings were crispy, some were chewy, and the rest were in between. I have no idea how long there would keep, because they were all gone within 24 hours.

I have made this soup many times, but it gets its name from the time I made it on Election Night in 2008. Me and my roommate at the time were both home that night, watching the election returns. I don’t remember the exact circumstances, but I think it came up that she had pronounced broth (as in the broth I bought to make soup) as “ba-roth” as if it had two syllables. Somehow this turned into a pun on Barak Obama’s name, and before I knew it, my soup had a new moniker:  Ba-roth Obama soup. 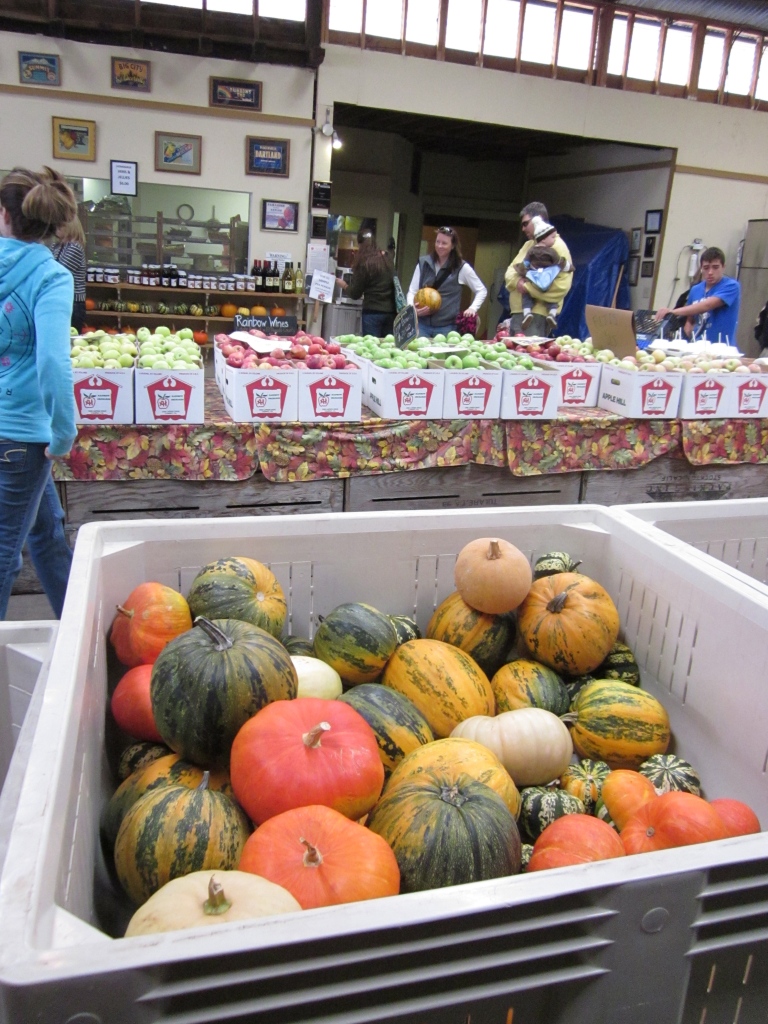 [sorry, I don’t have any before photos of acorn squash, except for the little bit you can see in the apple butter photo. Enjoy this alternate squash photo instead.]

Pre-heat oven to 400 degrees Fahrenheit. Cut acorn squashes in half with a good sharp knife. Scoop out and save the seeds for later. Set the halves face up on a baking sheet. Drizzle some olive oil on them and bake until tender, about 45 minutes. Put seeds on a separate sheet, sprinkle with salt and pepper, and stick them in for the last 10-15 minutes. When the squash start looking brown they are most definitely done. When the seeds start making popping sounds, they are also done.

Remove squash from oven and wait for them to cool down enough to touch. (I tend to rush this step and I usually regret it). Scoop the flesh from the skin and place into a blender with the broth. Blend.

Pour the mixture into a pot and heat it on the stove as you add the lemon juice, olive oil, salt, pepper and smoked paprika. Serve with parmesan cheese and/or roasted seeds on top. 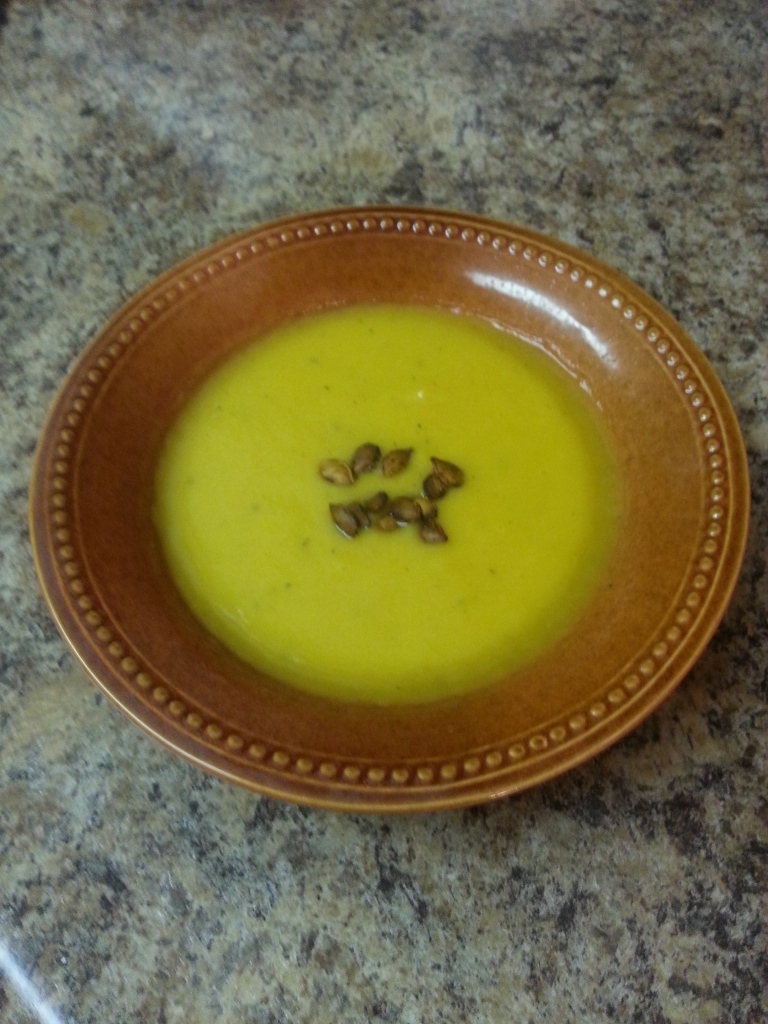 I made this soup again on Election Night 2012 two weeks ago, and it was just as delicious. I’m pretty sure that I have started a new tradition. You can use other squash of course, but I really like the flavor of the acorn. I have no idea what originally inspired this recipe. I know that I first made it with sazon goya con azafran seasoning, which is amazing and which you should totally try. I haven’t had any luck finding it in a local grocery store though, so smoked paprika is my substitute. Still delicious! 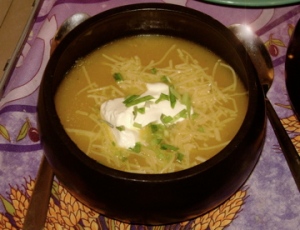 Store bought kale chips seem to be everywhere now (ok at least at Trader Joes and Whole Foods), but I distinctly remember the first time I tried one, it was homemade and delicious. It was at a Super Bowl party this year, and it was one of the tastier things among a sea of typical game day food. Do I remember who was playing in the game? No. Do I remember the kale chips? Yes. Because they tasted way better than I thought kale could taste. I will probably make them myself come January.

Preheat oven to 175 degrees F (or 200 if you oven will not go lower than that). Wash and dry kale and remove center stalks. Cut into pieces and place on baking sheet. Drizzle all over with olive oil and turn pieces to coat. Sprinkle with salt and pepper. Bake for 15 minutes, then turn the pieces over with tongs. Cook an additional 10-15 minutes until pieces are crispy.

Ok with this recipe the temperature and the timing are actually pretty important. Basically, you want kale to cook at a low temp for a long time. A high temp with burn the thinest parts before the thick parts cook. Keep that in mind and you can’t go wrong!