It’s my four-year blogiversary, and even though I an swamped with work, I can’t forgot my annual tradition of sharing WWI era knitting patterns! Since I started this blog on 11/11/11, which is Veteran’s Day in the US and Remembrance Day in Canada and the UK, I have been sharing patterns from my 1918 copy of Fleisher’s Knitting and Crocheting Manual (16th edition). 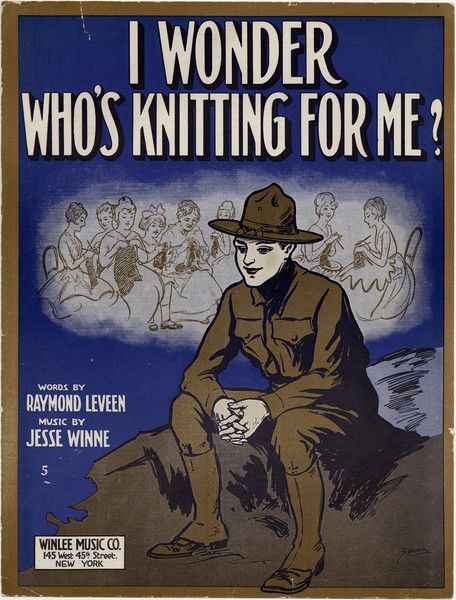 For previously posted free patterns and instructions on needle size, yarn, and gauge, please see the posts from 2012, 2013, and 2014.  And now onto the pattern book!

(things I love about this introduction: all service wear has been “approved by competent authorities”; scarves are apparently “growing in favor,” and US knitters and crocheters are collectively known as “yarn users of America.”)

First, up: The Red Cross Afghan. 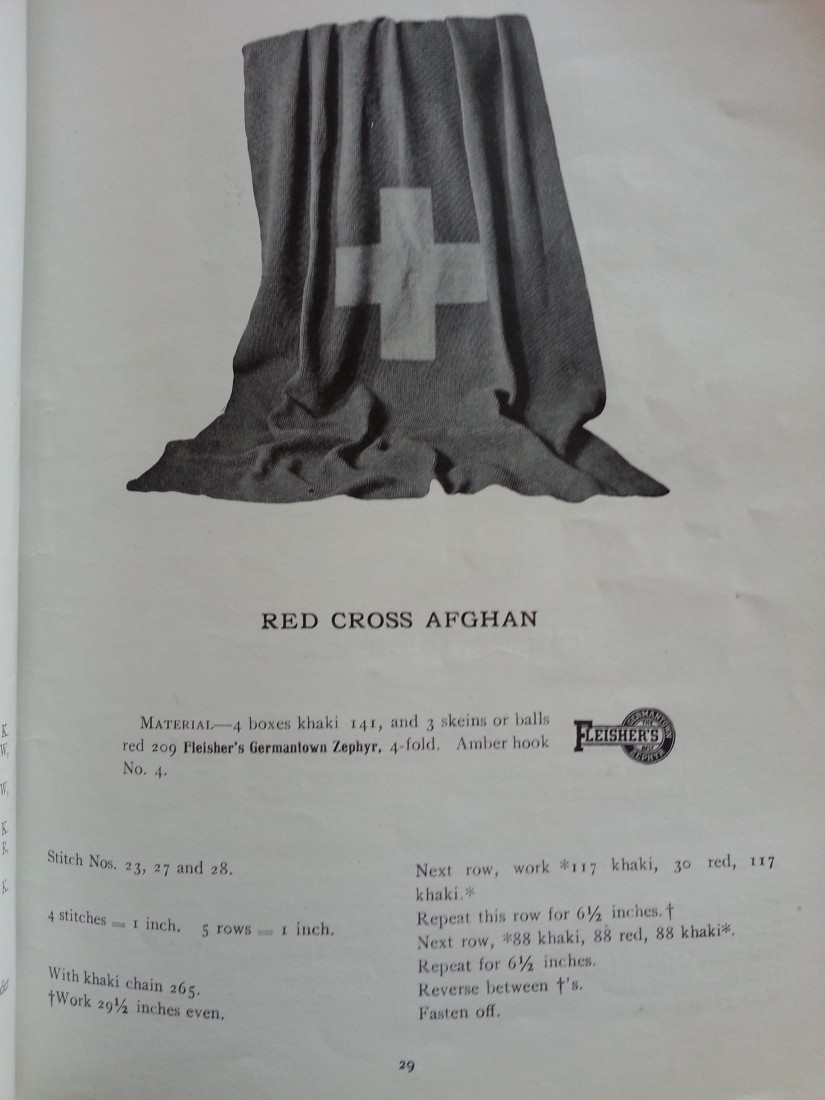 This is a crochet pattern, which I suppose makes sense, given the heft of blankets. But note that cross here is done in “khaki” yarn, not white! 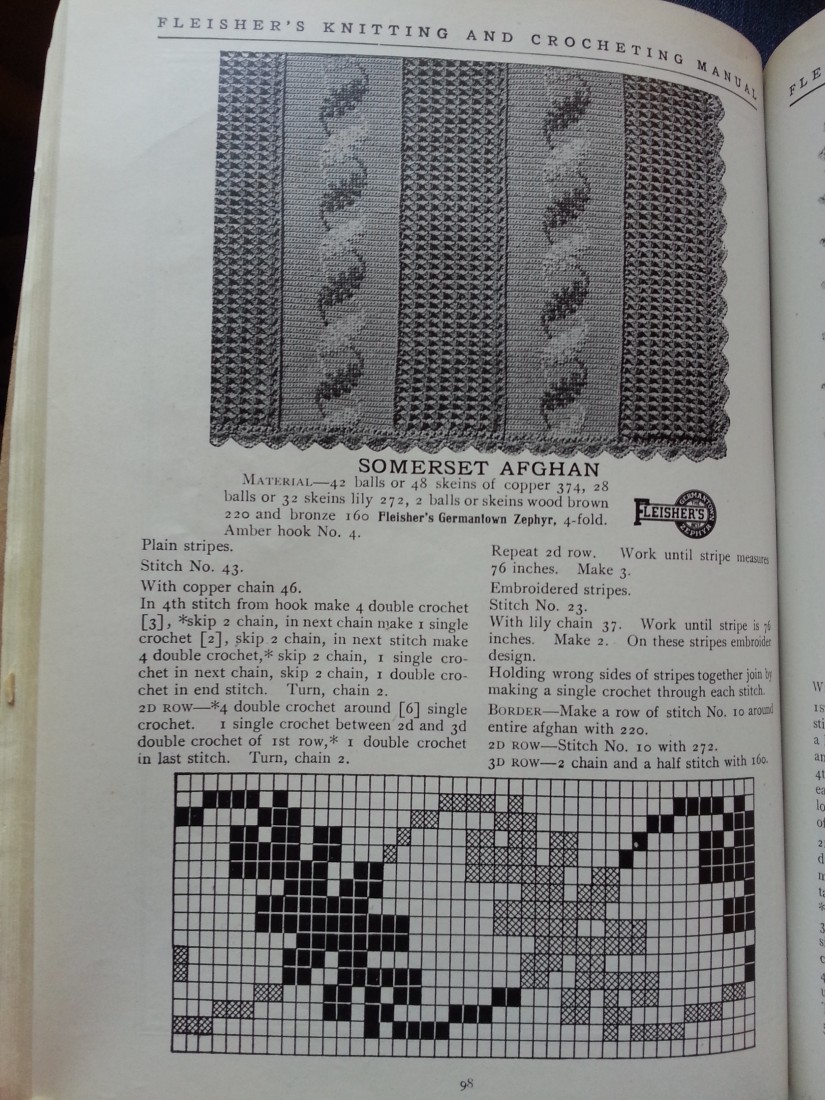 Another crochet afghan, but this one has an intriguing colorwork design. Is it some sort of leaf or vine? I’m not sure, but part of me wonders if it could be adapted into a nice knitting colorwork pattern as well. 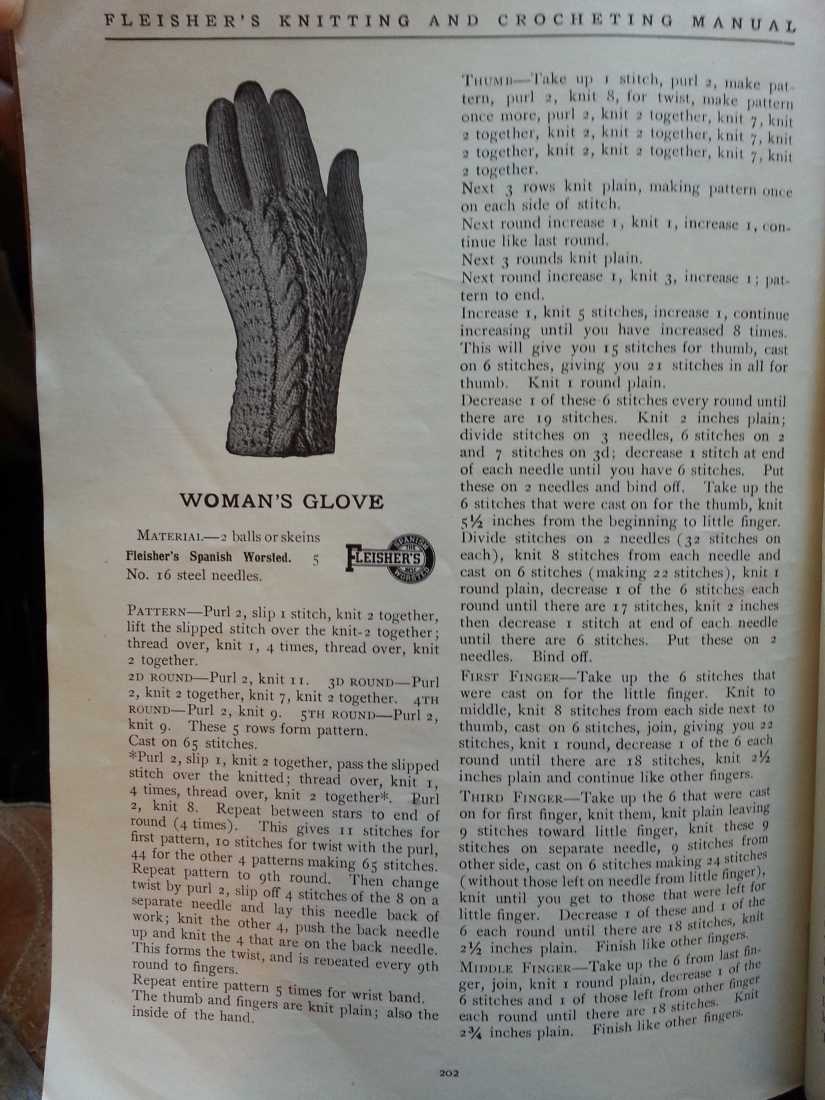 I love the little details on this glove, especially the cable. Of course I doubt I’d attempt these, as I’ve never made gloves and these patterns are often a bit vague on the details.

Look at this long full coat! I don’t even want to imagine how long with would take me. I’d at least ditch the belt. I do like the pleats though. 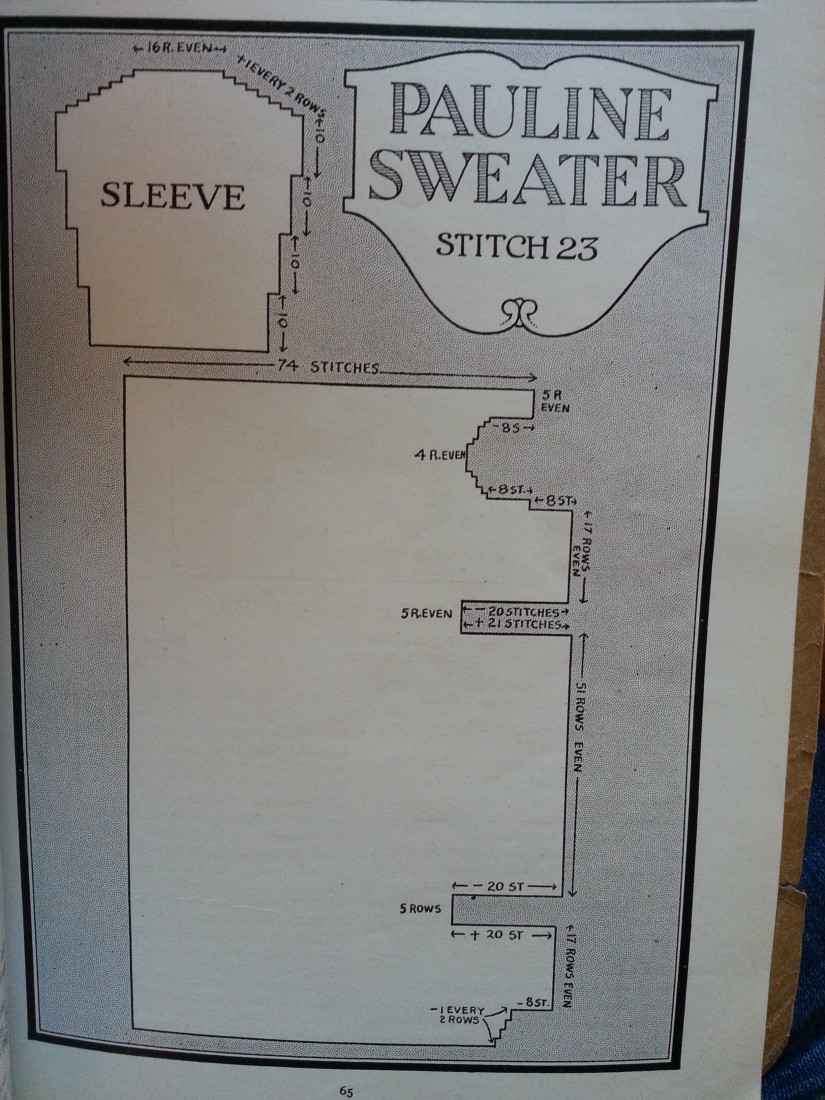 This is a child’s crochet sweater, but I’d rather like it in a grown up size. I think the off center buttons are such a nice touch. 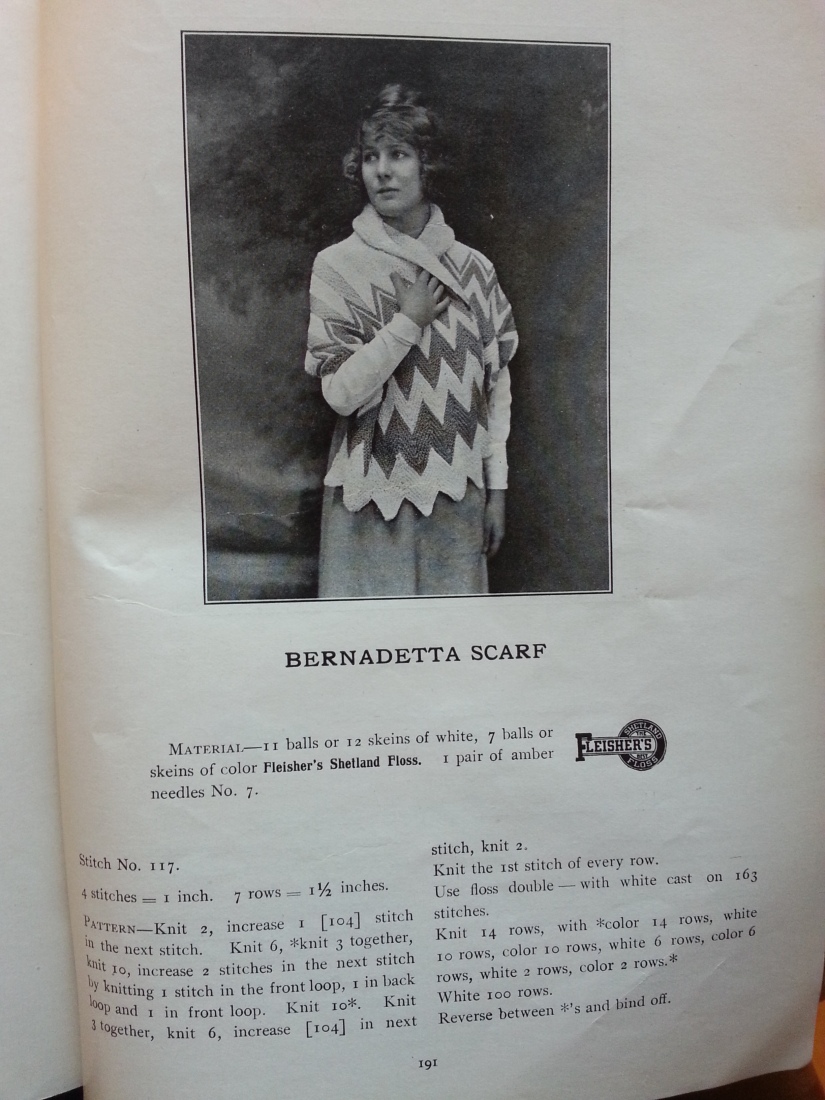 I think this might be more accurately labeled a shawl due to its size, but it’s hard to see the full shape from this photo. Nevertheless: what a lovely chevron piece!

I complain a lot about the vague directions and unclear photos in this book, but it reality these is a little section that’s part stitch dictionary and part closeups of stitches used in the patterns. (I still don’t know what “narrow” means as a stitch though…)

Hope these World War I era patterns are useful to you!

p.s. I still wear the red crochet poppy I shared in my very first post: 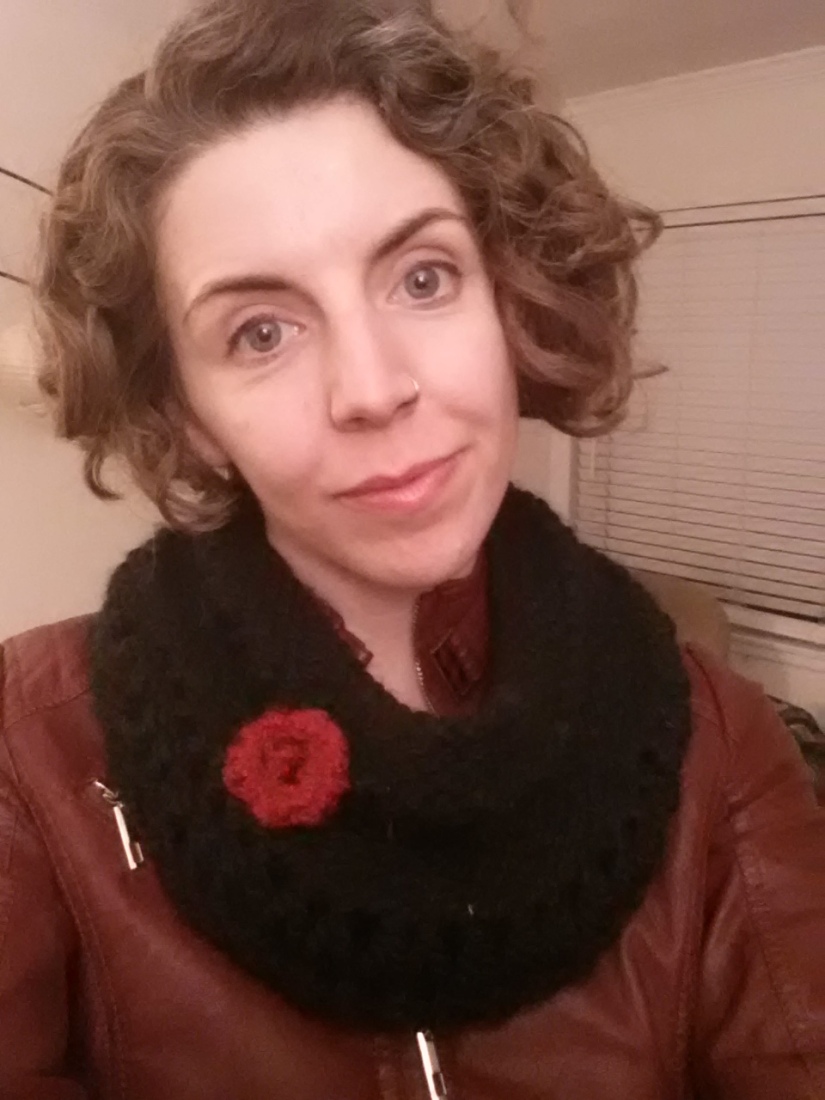 Three years ago—on November 11, the anniversary of World War I’s end—I started this blog. Every year since, on what is known as Veteran’s Day in the U.S. and Remembrance Day in the Commonwealth, I have shared free knitting and crochet patterns from my thrifted 1918 copy of Fleisher’s Knitting and Crocheting Manual (16th edition), which dates to the era of the Great War. (Check out the 2012 post and the 2013 post for more patterns.)

I’m continuing the tradition this year with a special post of all cardigan sweater patterns. There’s a little something for everyone—knitting and crochet, children’s and adult’s sizes. I decided to share all sweater patterns partly because it’s National Knit a Sweater Month, and partly because I have finally seen what one of these 100-year-old sweaters looks like in color! Way back in February, Cassandra of Knit the Hell Out knit the Pensacola Sweater from this knitting manual (You can read about why she made it and how she interpreted the pattern here). You should really check it out! 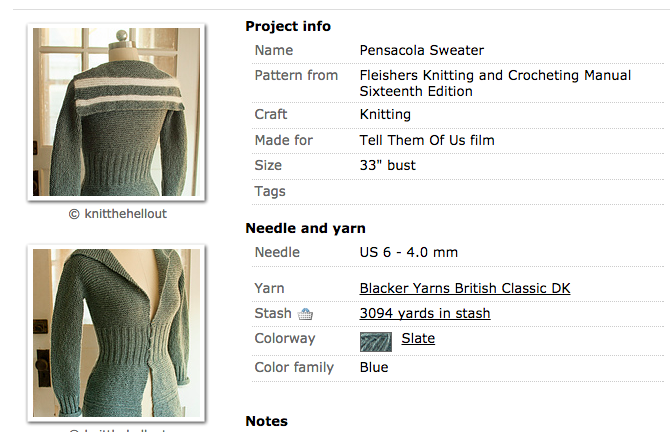 Sweaters are inspiring me this year. So without further ado: this year’s free knitting patterns!

Have some little ones? Then check out these adorable mini cardigans for children. Like most of these patterns, there are no sizes listed. The “Germantown Zephyr” yarn was a probably a DK or worsted weight yarn and a ladies vest took about 6 balls to make, if that helps. As the Bobby Sweater requires only 4 balls, I would guess it’s probably more of a toddler size, and the Rosemary Sweater at 8 balls was probably intended for preschool to early elementary school age children, but again, it’s hard to say.

I love the simplicity of Bobby—only 3 big buttons!  But I also love the details on the Rosemary, with its fun collar, interesting stitch pattern, and off center row of buttons.

Who can say no to Angora cuffs? Ok, that’s not really the biggest appeal of this women’s cardigan to me. What I like about Athol is the stitch pattern, which looks easy enough but is eye-catching with its ribs and ridges. I also really appreciate that sweater model is making use of those pockets. Athol also comes with a handy schematic of for sweater construction. It looks pretty straightforward—back, set in sleeves, two front pieces. (Guess you’re on your own for attaching the collar.) One of the interesting things about this Fleisher’s Manual is how many crochet patterns it had. Northwoods is a boy’s cardigan done in crochet with a worsted weight wool yarn. I think every detail of this sweater is nicely done—the pockets, the cuffs, the shawl collar.

While I’m not sure what size it is, this patterns also comes with a schematic for how to piece it together. Once you have swatched to get gauge, you could figure out approximately what size you will end up with.

P.S. There is also a man’s version of this sweater, but it’s missing pockets! Why?? I don’t know, but it just didn’t look as nice as the boys version.

So instead of sharing the adult Northwoods, I thought I’d share the creatively named “Man’s Sweater.” Man’s is also crochet— not exactly a common phenomenon for men’s cardigans! (I looked on ravlery for crochet men’s cardigans and there are like, six total.) I think the upper pockets are a bit ridiculous (and I swear they are not lined up properly in the photo) but I like the button collar and the overall construction looks very pleasing.

Hope you enjoyed this year’s 1918 patterns! I promise to have some of my own knitting posted soon.