In spite of my vegetable garden’s best efforts to off itself, I now find myself with an abundance of fresh produce. Late August never fails to be a period of peak production among my plots—no matter that they were planted weeks apart. Here’s just some of what I harvested in the last two weeks:

close ups of the various vegetables in that photo:

And a different day’s harvest: 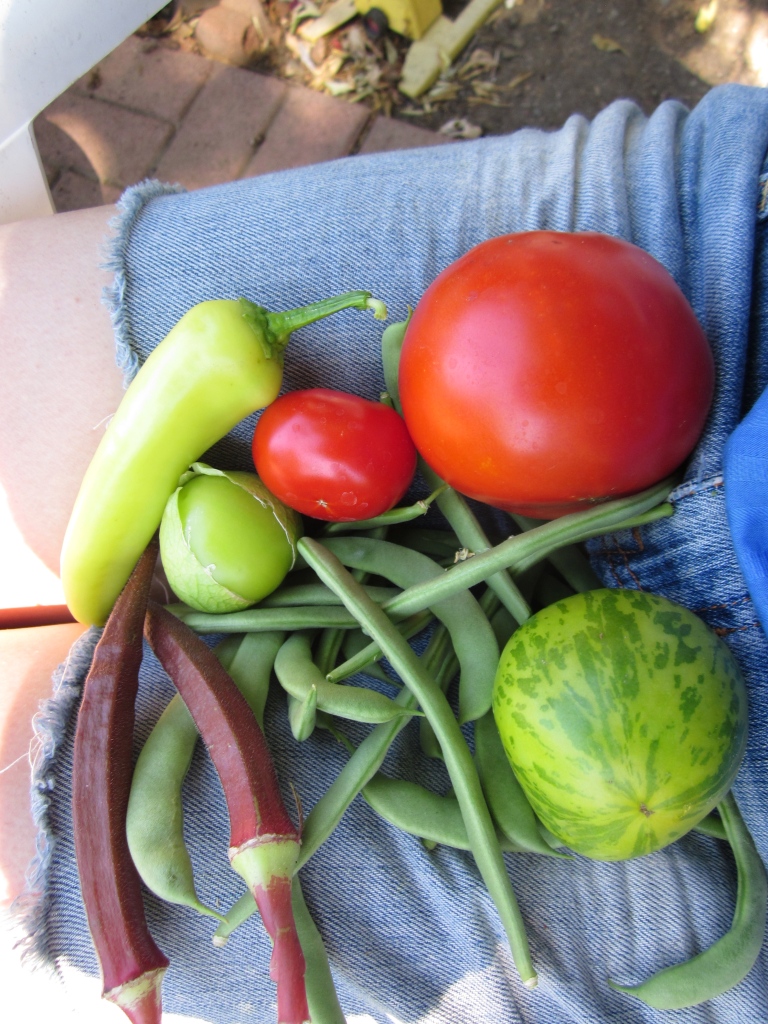 If you’re keeping track, you may see that I have corn, cucumbers, peppers, green beans, okra, tomatillos, and four kinds of tomatoes!

However, since it is still in the mid 90s most days, I don’t often feel like spending a lot of time cooking. Which is why the foods I make with my garden bounty this time of year are really super basic. Lazy even. But they work, because if you are using fresh stuff that you love, sometimes it’s best to just enjoy it in its purest form.

I have an embarrassment of tomatoes (especially big beef and shady lady) and a surprising number of resilient cucumbers (more lemon ones that Armenian). The easiest thing to make with them is this salad:

This is about as basic as it gets—cut up the tomatoes and cucumbers, add vinegar, oil, salt and pepper, and eat. It gets even better if you can chill it for like 30 minutes and let the vinegar soak in (but not too long—we’re not making pickles here). Any vinegar will work, but my favorites are rice vinegar and balsamic vinegar. I used rice vinegar in the version pictured. You can also add pretty much any other vegetable you that would eat raw in a salad to this dish, like bell peppers and green beans. Since my lemon cucumbers are yellow, this is why I think of it as “stoplight salad”:

Besides the beautiful colors, this salad has the benefit of being highly adaptable—there’s really no minimum amount of vegetables you need to make it. You don’t even need anything beyond tomatoes if, like me, you grow them in enough different colors:

Ok, so I didn’t even combine these guys in true salad form—really that photo is just an excuse to show off my multicolored tomatoes! (From top to bottom: green zebra, kellogg’s breakfast, shady lady)

This is the first year I successfully grew corn. Corn! I really doubted these stalks for a while, but I was thrilled at what I found when I shucked the first ears. How thrilled? This thrilled:

This corn is best when eaten super fresh—it’s much sweeter and less starchy that way. So as soon as I picked it, I rinsed it, wrapped it in foil, and stuck it in a 350 degree oven for 30 minutes. Yes, I realize this requires turning the oven on in August. But itt also requires basically no other prep and thus little time in the kitchen. When it was done, I added butter, pepper, smoked paprika and smoked sea salt for a delicious, smokin’ ear of corn:

I ate it with some spinach feta ravioli and some sautéed mushrooms and okra (and yes, that is the red okra from the garden—since I only have a few plants, I  often add it to whatever I’m cooking). Delicious.

This recipe is slightly less lazy than the other two, but I did make it for the first time while in a hurry to get to campus, so I don’t think it’s that involved. Also: so worth it. And since I changed it enough from the other recipes I found, I think it’s fair to call it my own green salsa recipe (Isabel was my “Spanish name” in Spanish class throughout most of high school, since my name doesn’t exactly translate).

I love green salsa, and I didn’t get a chance to use any of the tomatillos I planted last year. I was disappointed. And then, out of nowhere, they came back this year. As it turns out, heirloom tomatillos are the glitter of the plant world—once you plant them, good luck ever getting rid of them. If one overripe fruit falls on the ground and seeds itself, it’s over—tomatillos everywhere.

I used a combination of these instructions from andrea’s recipes, this other recipe, and my friend Amber’s “salsa concept” list (see below) to get an idea for how to make green salsa. I’m especially proud of my creativity in substituting what I grew in my garden for other ingredients—except for the garlic (which was thankfully leftover from making quesadillas), everything below came from my yard:

Ingredients  (approximate amounts as I remember them):

about 2 Tablespoons juice from a grapefruit

salt and pepper to taste

Using my cast iron skillet lined with foil, I roasted the tomatillos and garlic for a few minutes on each side, until they were a bit browned:

Meanwhile, I chopped up the other ingredients, taking care to wear gloves and using a separate cutting board for the Thai Dragon peppers, because they can be hot (50,000 to 100,000 scoville units if that means anything to you).

When all of that was ready, I threw it in a blender for a minute, maybe less. That was it. Done:

It didn’t make a ton of salsa, but I was looking to see how this recipe turned out before making a huge batch. The results were excellent— exactly what I was hoping for. And it made just enough to almost fill my old salsa jar, which was plenty for me. Despite the “medium” label on the lid below, I would classify this salsa as “hot.” Not too hot, but it definitely had its share of heat, depending on how many pieces of hot pepper in your bite. I think it would be just fine without the peppers if capsaicin is not your thing.

If you want to improvise ingredients with salsa, I recommend my friend’s salsa concept list, which she describes thusly…

“here’s the concept:
1) something to bulk it up and provide most of the flavor (tomatoes, tomatillos, grapefruit, mango, avo, etc.)
2) a hot pepper (jalapeño, serrano, bird chile, habanero, ancho, etc.)
3) an herb (usually cilantro, but sometimes other stuff works)
4) minced onions (whatever seems to work best with what you’ve got, scallions, red, white, shallots, etc.)
5) lime
6) salt
optional: additional spices/ flavors (garlic, booze, cumin, etc.)”
I would even add that you can substitute other citrus for lime, especially lemon or grapefruit, in a pinch.
I still have plans to make some slightly more involved recipes with my vegetables. But for now, I’m sticking to (mostly) lazy recipes.