This summer, I tried my hand at a new craft: ceramics.

I learned quite a bit along the way, but the main thing I learned was patience. This art form clearly takes a lot of time, skill and effort to master, not to mention a real artist’s eye if you want to make something beautiful. For noobs, that means a lot of flops. But the flops sometimes turn out to be endearing in their own way. If you can let go of perfectionism (and you must), it can even be kind of fun.

The specific class I took at the Craft Center was titled functional handwares. Translation: no wheel throwing, just handbuilding, and making things that are useful, not just decorative. I still have a few items to finish up, but here are the things I made, in the order I made them.

This is a pinch pot—made, as you could guess, by pinching a ball of clay into a shape. While it didn’t come out even, I’m happy with the size of it, and I like the base. I also was pretty pleased with the glaze color for these two.

This is a coil pot, made by rolling out long thin pieces of clay and coiling them on top of each other to form the object. I did not like this technique as much—I didn’t much care for the rolling nor the blending required to make it. I did experiment with carving a leaf design into this pot, which you can just barely see.

Ok, so this wasn’t actually something I learned in class. Our instructor was gone during the second week, so I came into the studio, on my own. I saw that someone had built a little clay tree, and I basically copied it, albeit poorly. However, the cool thing about it is that I found a way to make it functional as a jewelry holder—right now it is on my dresser, with rings on its branches. I hope I get a chance to try this cool brown glaze again! 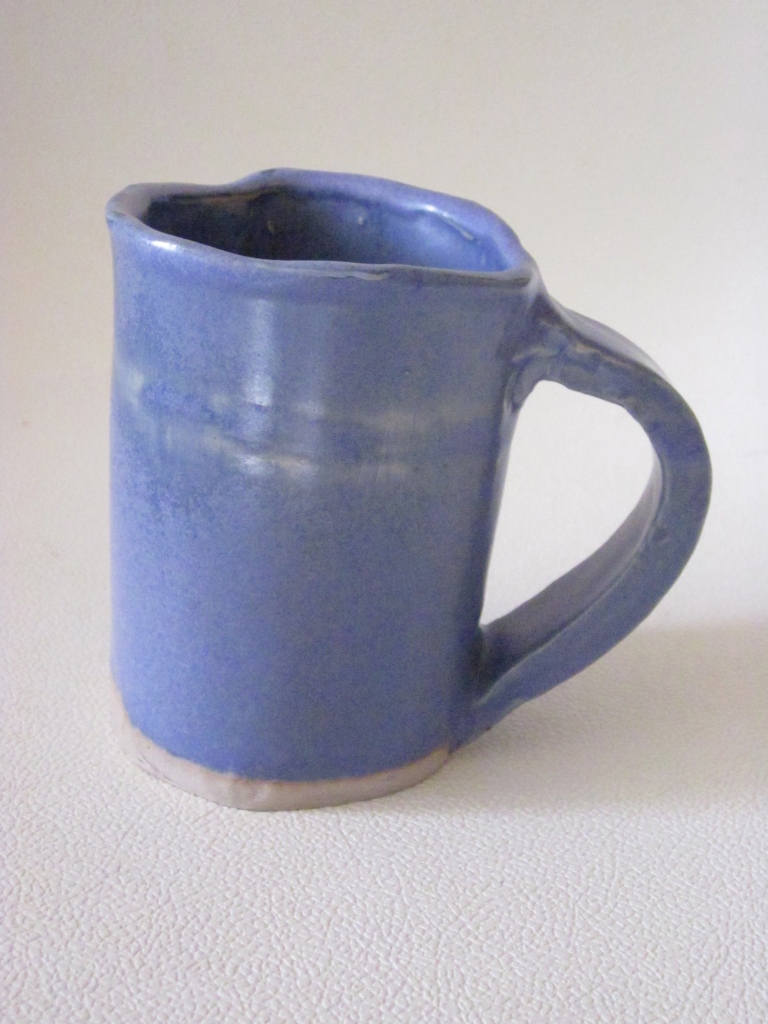 Ok—not my best work but I’m showing you anyway. This was the first mug I built, using slabs rolled out with a slab roller. I underestimated the size here—I’m told there is a 15% size shrinkage when you fire items, which made this mug child sized. It was also the first thing I ever glazed, and the glaze I chose was super thick–you can see the line where it overlapped when I dipped it.

On the other hand, this mug is one my favorite things I’ve made so far. It felt gigantic when I built it but with the shrinkage it turned out to be a good size. The lines I carved out of the body are subtle but give it a nice shape, and the handle and rim on this one are less wonky. Also the glaze turned out great—a lovely color and the right thickness. I am drinking tea out of this mug right now.

This was my first attempt at three things—shaping on a plaster mold, using a clay stamp(?), and underglazing. The shaping went ok except for the corner that droops. Keeping all the square shape does kind of make this look like an ashtray though. The clay stamp or whatever it is called turned out great—I love the woodgrain. However, the yellow underglaze I used did not turn out at all. Maybe I just put it on to thin? I used a clear glaze over it and really it just looks white. But I like it anyway. 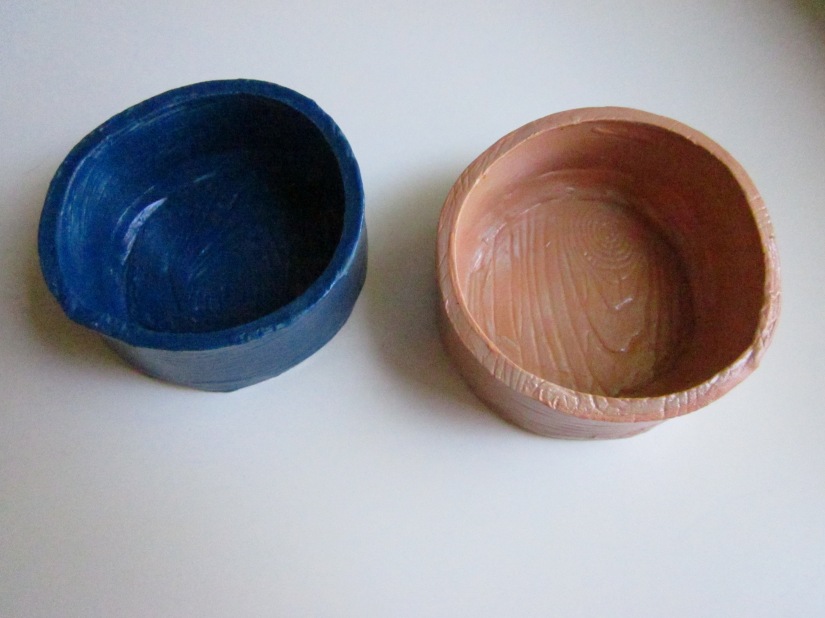 Combining a lot techniques here, I tried to make some short, thick bowls about the size of a food and water dish for a cat (or small dog?). I used the underglazes again here, and discovered that the colors come out very differently. I was not expecting such a deep blue or such a pale orange. Nevertheless I like them. Now I just need to find someone with a pet to give them to who doesn’t mind their homemade quirks, as my cat has an automatic feeder and waterer (we are both happier that way). 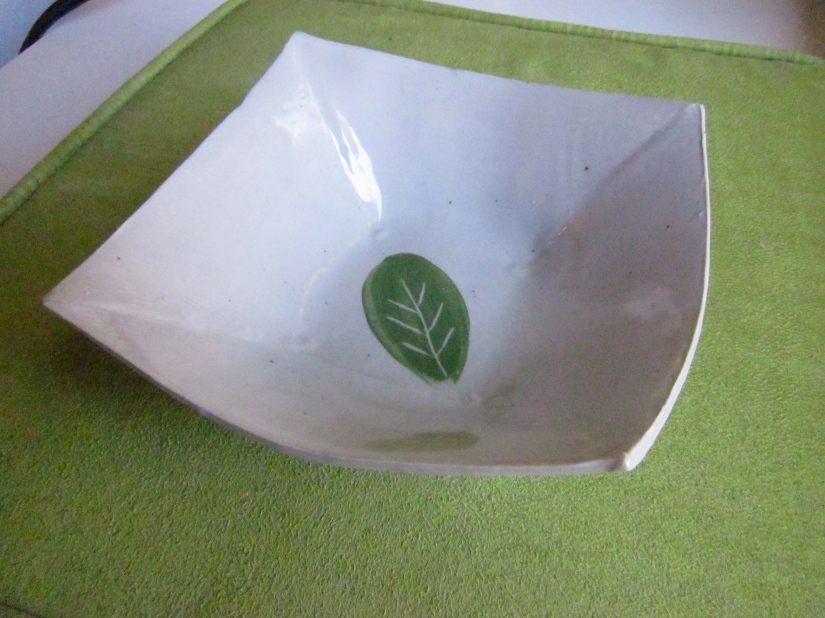 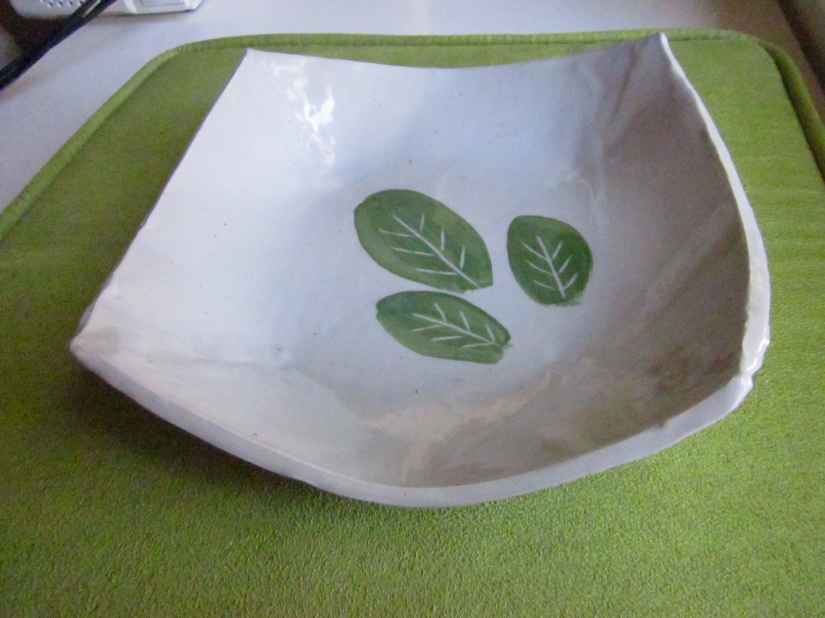 These are probably my favorite thing I’ve made so far. I did the wider one first, trying to get the hang of the technique—you have to measure and cut a square piece precisely, and then you have to cut kite shaped pieces out of the corners, then you reconnect the corners. Getting them to turn out even takes some skill.

The leaves are my favorite. I painted them before the first firing, then scraped out the design in the middle. The clear glaze lets the design shine through.

This is another piece that didn’t turn out as planned, and still worked great. Also, I’m combining two crafts here!

If you’re not familiar with the concept of a yarn bowl, the basic idea is this—when you pull from a ball of yarn as you are knitting (especially if it is not a center pull ball), the ball is going to roll around all over the place. However, if you can keep it stationary, knitting can commence without said ball rolling (sorry, yarn chasing cats of the world). A bowl with hole or a cutaway to pull yarn through provides this function.

So my yarn bowl turned out a bit, well, funky. First, the cut out part dried in an awkward way, separating at an angle. Then I was in a hurry to glaze it because they were doing the last glaze firings before closing the craft center for three weeks, and the blue glaze had not been stirred in many days. The result is a really swirly uneven glazing. If I’d know what to do then, I probably just could have dipped the not-well-glazed half into the glaze again. But since this is not a bowl that I will be holding or using for food items, I don’t really mind it. It even looks kinda cool, with the right mindset.

I doubt that ceramics will become a new craft in my life in the way that knitting is—after all, it takes a lot more equipment (kilns!) to actually do it. But it was a really fascinating artform to learn—and I wouldn’t mind trying my hand at a wheel eventually. After I find places for all these ceramic objects in my apartment anyway.

1 thought on “Glazed and confused: my first attempt at ceramics”