(NSFW: The following post contains photos of a phallus made from yarn and as many phallic puns and double entendres as I could manage. You have been forewarned.)

It’s been a long time since my last post! Let’s skip the part where I explain how busy I’ve been, and get on to the gettin’ busy part—namely, the phallic lip balm holder. Also known as the penis lipgloss cozy. Also known as the chapdick. (I could go on, but you get the idea): 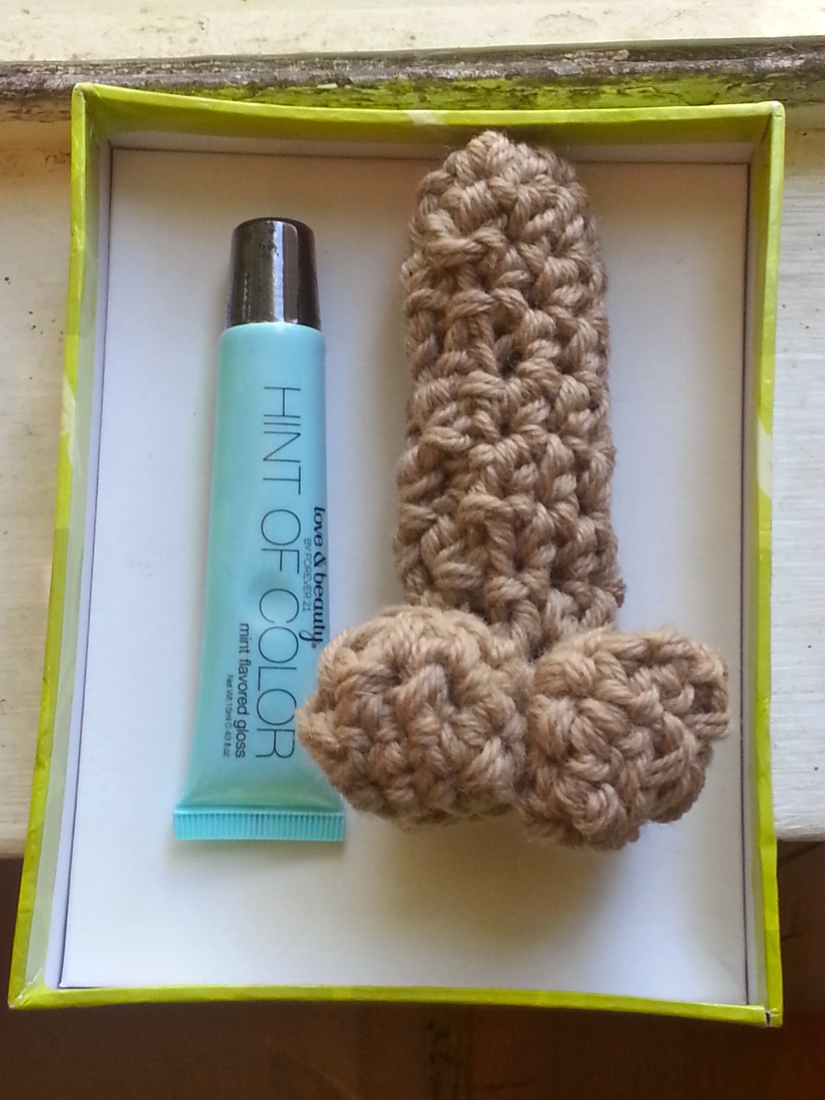 This project didn’t take too long (long!) to finish (finish!), mainly because I was really pressed for time. But I wanted to add a personalized touch (touch!) to my bachelorette party gift for a fellow knitter and crafter. Another friend suggested I knit something as a gift, and I recalled how my version of a chapstick holder that I blogged about back in February looked a bit like a tiny penis, thanks to the color of yarn I used. And so that became the inspiration for Phallicozy.

While I could have used a pattern, because there are some nice free knit patterns here and here as well as a nice free crochet one here, I decided to just wing it. It wasn’t too hard (hard!). I went with crochet instead of knitting and held the yarn double because I knew it would go faster and that the finished project would be thicker (thicker!) I tried to take notes as I went, but I am the worst at crochet patterns because I rarely read them, so they are rather vague.

I started with chaining 5 and making a circle, then increased in every stitch so that each round was 10. I kept crocheting in the round until it was about as tall as the lip gloss I was going to put inside it (put inside it!). Then I decreased every two stitches just before the end, which became the bottom (I wanted it to open at the top but it didn’t work with the shape of the lip gloss). For the testicular formation, I started with the same first two steps, then crocheted one round, then immediately decreased in every stitch in the next two rounds, finally pulling the yarn through the last few stitches at the top. I stuffed each with half a cotton ball, tied the family jewels together and sewed them securely the base. The final result was that it could stand erect (erect!) all by itself:

If I’d had more time, I would have put a little more effort into the contouring and shaping of said member and figured out a way to give it a top opening. But as it is, I’m pleased with the results. It’s hard to go wrong with a chapdick!